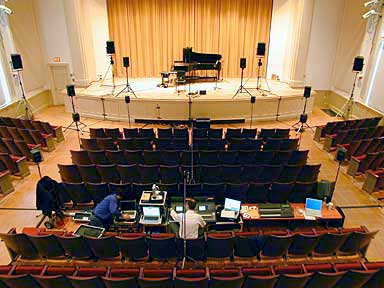 Diffusion refers to the practice of distributing sound throughout a space using multiple loudspeakers—usually with real-time control over the sound levels, equalisation and placement of the sound. The source material may be live performers and/or stereo or multi-channel electroacoustic sources. The main goal of this practice is to introduce another element of interpretation into the performance of electroacoustic music, allowing for greater expressive communication with audiences. This requires a sound projection instrument sufficiently flexible to adapt to the needs of interpretation and to provide first-rate sound diffusion quality.

Hydra is comprised of 32 loudspeakers placed all around the concert hall, distributed both horizontally and vertically, in order to provide a wide range of sound planes and perspectives. Two control interfaces with 32 faders create the possibility to control in real time the individual loudspeakers, or groups of them, which are especially configured for each work performed.

Well established diffusion systems in Europe, with evolved performance practices, include the Acousmonium, conceived and developed at the Groupe de Recherches Musicales (Radio France) in the early 1970s, BEAST (Birmingham Electroacoustic Sound Theatre) developed by Jonty Harrison at the University of Birmingham, GMEBaphone, IMEB, Bourges (France) and the loudspeaker orchestra of Musiques & Recherches in Belgium.

review of Hydra concert of December 10, 2010 by David Dominique


video of the first Hydra setup